Posted on March 26, 2014 by robinofrockridge

Police captain: ‘He’s a tough dog who did his job well yesterday. He’s a hero’

Posted on March 21, 2014 by Behind The Badge/Anaheim PD Blog

After being shot in the face, Anaheim police K-9 officer Bruno returned to his handler, whimpered once and wanted to return to the action. 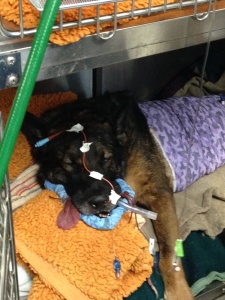 Even as his handler raced him to the hospital, Bruno’s ears were up and he didn’t want to lie down, police officials said.

“He saved at least one life yesterday,” said Police Capt. Ben Hittesdorf Friday morning during a briefing of the Chief’s Advisory Board.

Police identified the man who shot the dog as Robert Andrew Moreno, 21, an Orange gang member who was released from prison 10 days ago.

He was killed Thursday when officers returned fire.

The action began to unfold about 2…

I write books for kids.
View all posts by robinofrockridge →
This entry was posted in Uncategorized. Bookmark the permalink.