Posted on April 29, 2011 by robinofrockridge

Arletta and I posed at the back of the Grist Mill building where Jack London wrote in his upstairs office. It is said this building has a ghost. If it does, I like to think it is Jack London's ghost working on another story!

Our Tuesday morning writers critique group met on April 26th at the Grist Mill building in Glen Ellen, California. There
we had our weekly meeting out on the deck of the grist mill with the office of
the famous American author Jack London looming over our shoulders. It is said the building now has a ghost. Does it? If it does, I like to think it is Jack London working away on another story in his beloved Glen Ellen.

Memories of Jack London, author of such notable novels as Call of The Wild, a top rated Y.A. story in its time, and White Fang, abound when one visits the area around Glen Ellen. A California State Park is established there in Jack London’s name, with land from his original Beauty Ranch included in the park. Hiking and horseback riding trails wend through the spectacular settings on the slopes of Sonoma Mtn. I have enjoyed riding my horse on those trails a number of times and viewed ponds and Beauty Ranch projects designed to benefit the ranch and the land. London was an environmental steward of his land–perhaps ahead of his time.

In the town of Glen Ellen is a group of buildings known as Jack London Village. There the original grist mill building still features the water wheel which powered the mill. London maintained a writing office upstairs with views of the two creeks next to the grist mill. This was his office away from his home. 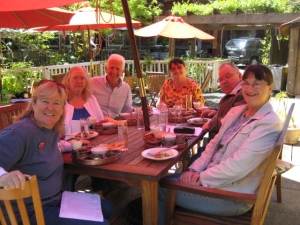 Our Tuesday morning writers group met and had lunch at Jack London's Grist Mill building where he maintained his writing office upstairs. Maybe some of his great writing will rub off on us! (L-R.:) Shane McGarrett, Arletta Dawdy, Kent Sorensen, Sharon Hamilton, Ron Davys and Robin Moore.

It is heartening to know that writers and others may dine and enjoy the peaceful setting next to the creeks, along which the grist mill operated. While we dined on the deck of the Grist Mill, next door is the well known Yeti Restaurant owned and operated by Narayan Somname and his family. They serve delicious Indian and Nepalese food. That was a first for me to enjoy their tasty Nepalese lunch. In mid May they will open the Grist Mill Bar and Grill next door offering American and international dishes. The timber framed opening around the fireplace in the grist mill building makes one think back to the times of Jack London when he was writing upstairs.

Doesn’t it pique your interest to know that Jack London penned some of his famous stories overlooking that wooden wheel which was turned by the force of water to power the grist mill? I know it teases my writing muse.

Here we are in the upstairs office where Jack London did his writing at the Grist Mill in Glen Ellen, CA.

We were treated to views from the upstairs office where Jack London wrote when at Glen Ellen. That room will soon become a banquet room with seating for up to 20-25 people. While we enjoyed seeing the lofty space, the beamed ceilings and the picture windows overlooking the creek I wondered–What might he have written about our Tuesday morning gatherings? I know that Sharon, Kent, Shane, Arletta and Ron are among some of my treasured friends and writing advisors, along with Sandy and Jeanne from the Tuesday afternoon writing group. They are such a help to me!

Thank you author Kent Sorensen for introducing us to this inspirational setting and these two restaurants. I look forward to our Tuesday writing groups meeting again in the shadows of Jack London’s office there in Glen Ellen. Perhaps next time we’ll enjoy delicious American food served by Narayan and his family when they open the Grist Mill Bar and Grill. Might it be London’s shadow or his ghost observing as we help each other with our writing?