Review of The Journey to Andersweldt

Posted on January 28, 2012 by robinofrockridge

I applaud my writer friend Charles Markee for permission to re-post his excellent book review about The Journey to Andersweldt by J.L. Jusaitis. This is a unique mystery wrapped in a travel package for middle grades students set in Saltzburg, Austria. Charles has a talent for effective reviews of both books and movies. He also has published an adventure fantasy novel perfect for middle grades boys, Otherworld Tales: Irish The Demon Slayer. Here’s his review:

Unexpected adventure, secrets and challenges greet four pre-teens as they journey on a tour to Saltzburg, Austria, the birthplace of Mozart. Lulu, Chloe, Morey and Greg become self-appointed detectives in a mystery that involves the forces of the dark and takes them ultimately to a co-existent Otherworld, known in Austria as the Anderswelt in search of Danu.

The characters are well drawn and Jusaitis moves them around Saltzberg with descriptions of the environment so complete and elaborate, you’ll never need to go there or, on the other hand, you may become motivated to see the sights for yourself. The storyline is delightful and light hearted with hidden threats that are engaging but never scary. In fact, Anderswelt exists more as a fairyland than an ominous alter-world.

Jusaitis is expert in her writing craft and it’s demonstrated by her use of English and her sentence structure within a writing style that is perfectly designed for the middle grade level. She writes in first person from Lulu’s point of view as the protagonist, with her best friend, Chloe, as her reluctant sidekick. For that reason, I believe the novel favors girl readers more than boys. Although the two boys, in support roles are, in themselves, interesting characters, Morey, an attraction to Lulu and Greg with his peculiar hobbies.

This is a pre-teen novel that will take its readers to a different world for many hours. 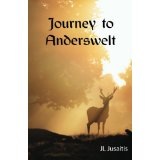 4 Responses to Review of The Journey to Andersweldt